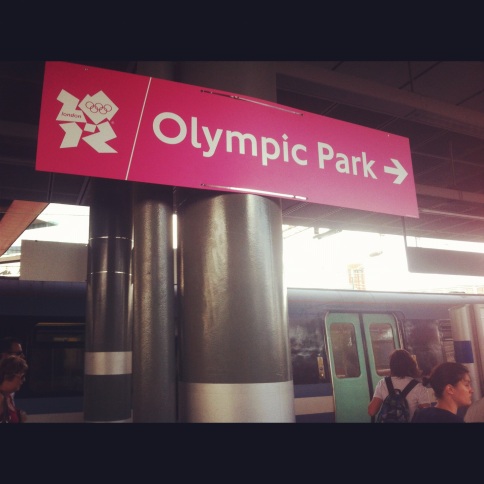 It’s remarkable. Numerous Olympic athletes, along with their friends and family, have livened up the atmosphere in London. I was here last summer and today there’s a marked difference; the town is filled with hope and positivity. It’s too bad I can’t bottle this up and take it home.

Every four years Olympic athletes serve as an inspirational beacon for their countries. But ask any athlete, their success is never unhampered by extenuating circumstances: injury, financial hardship, family issues, etc. But no matter, something inside of them, the love for their sport, their will to be champions, or their hope and belief that anything is possible, keeps them going. Many of these athletes, especially American Track and Field athletes, compete for little to no financial gain. They aren’t compensated like basketball players. Some have modest contracts, while others hold down part-time jobs to make ends meet. They are forced to stay physically in tune while working. For those of you who find it hard to go for a jog after a day of work, just imagine training at the elite level. Simply put, Olympic and Elite level athletes do what they do for the love of their sport.

There’s another side of the Olympics that’s not-so-inspirational, but definitely present, the definition of failure. So much emphasis is put on ‘medaling.’ And sometimes, more than just medaling but winning Olympic gold. Placing 4th is often regarded as failure, but someone has to get 4th right? As someone who’s not competing in the Olympics, it would be hard to imagine considering myself, or anyone for that matter, a failure for getting anything less than a gold medal. For those who place 4th or 23rd at the Olympics, they’ve competed at an unbelievable level and are among the best in the World. But we all know that success is bred from hunger. So, if you have the desire to perform at a high level, no matter your profession, there’s very rarely a sense of contentedness. We achieve one level of success and always want more.

So what’s the take away for non-elite athletes, for those working in finance, as doctors, as assistants or writers? There’s a saying, “Do what you must to do what you love.” I undoubtably agree with this but only under two conditions, that one have hope and gratitude. Like these athletes, everyday won’t be perfect, some days you’ll see professional or personal setbacks. But if you’re on a path, you must have hope that you are capable of achieving what you’ve set out to achieve. And if you have gratitude, you’ll find satisfaction on every level of your journey as you steadily climb higher, take a step back, and everything in between. Otherwise, what’s the point?