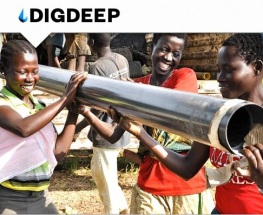 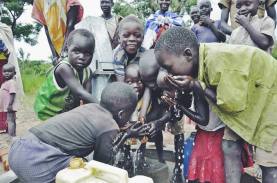 One early August morning, my producing partner and I blazed down a dusty red dirt road in central Tanzania. Our 5 days filming, in a village near Moshi, were quite the eye opener. I was eager to return to our hotel and take the hot shower I’d dreamt about the previous nights. My skin had adapted to not showering, but my mind had not. Suddenly, an image smacked me back to reality. On the opposite side of the road, I spotted a villager carrying water in a bucket atop of her head. Another car quickly approached, its tires kicking up red dust. Just as I wondered how far that woman had come and how far she had yet to go, the car passed her, dirt blowing into her face and, undoubtably, her water. I was furious. What was she going to do with the water now?

Prior to my recent trip to Africa, the idea of limited access to water was foreign to me. Of course, I was aware certain places were affected by the scarcity of water, but never having experienced it first hand,  my connection to the issue was anecdotal at best. I had no idea what a morning without a 20 minute shower and a cup of tea looked like. If you’d asked me to donate to a clean water project in the developing world, I would have no concept of what the mission truly worked to remedy. In the U.S. we use on average 550 liters of water per person/per day. In the developing world, where water is scarce, that average drops to 4 liters.

George McGraw (Founder/Executive Director) and DIGDEEP Water are looking to change this all together.

DIGDEEP, founded 3 years ago, focuses on enforcing the international human right to water – simultaneously empowering its ‘shareholders,’ while engendering empathy in the hearts of its donors. With water access projects, as well as education and advocacy programs, in the South Sudan, Kashmir, New Mexico and Cameroon, DIGDEEP thinks of its beneficiaries as stakeholders. When educating the community about the importance of clean water, DIGDEEP takes into account important social and cultural aspects. Looking at the Holistic Individual helps create sustainable programs. McGraw notes that 50-70% of water projects fail because outside organizations do not take into account the community they seek to serve. Lack of cultural knowledge makes it nearly impossible to provide fundamental information, like the causation between clean water and healthy bodies. Additionally, McGraw says that other organizations withdraw without setting up the proper infrastructure. This creates a “painful transition” once organizations leave because women are forced out of work and young girls are forced out of school, when resources become scarce again. DIGDEEP partners with established organizations, in each affected area, so that once the infrastructure is established, communities are not only willing, but able to sustain their own clean water projects.

So, how is DIGDEEP using Social Media for Social Good?

McGraw hopes to create what he calls “authentic relationships” between donors and shareholders. This approach to clean water awareness and fundraising has led to the interactive 4 Liters Campaign. The 4 Liters campaign challenges fundraisers to live on just 4 liters of water for 5 days. Over the course of the 5 days, participants will share their experiences via social media, while raising funds for DIGDEEP’s initiatives. The Campaign kicks off today, October 14th! Give it a try, if only for a few days! 100% of funds raised go directly to DIGDEEP’s initiatives.

When I asked McGraw what he was thankful for, he said, “the opportunity to witness gratitude and change in people’s lives.” I’m just thankful that he and his partners are encouraging active and educated philanthropy with a Human Rights-Based Approach.