Ok, so I usually call this post “A little daily inspiration.” But since I’m from Cleveland, and generally speaking the only articles people share about my hometown talk about it being the most depressed city, or the least livable city, I figured it was time to share something inspiring straight out of C-Town.

Chris and Lauren in Times Square!

Chris Harris and I met over ten years ago when we hosted the television show, “Brown’s Blitz.” Once Cleveland finally got their football team back (they fled to Baltimore), NBC’s regional affiliate decided to air a weekly sports show featuring a bunch of kids and Bernie Kosar. Each and every kid in the group has grown up and gone on to do awesome things. I’m not quite sure that we ever imagined we’d see our co-host, Chris Harris, on screen in the middle of Times Square for the release of he and Lauren Lanzaretta’s new album, Color of Love. But there he is, pictured to the right, and for the second time I might add!

Cleveland has a pretty lively arts community including but not limited to, the Cleveland Orchestra (their really amazing!), The Cleveland Playhouse, which puts on a number of great performances, and Playhouse Square. However, for an independent artist Cleveland isn’t as nurturing as say, New York City or Los Angeles. Despite all of this, Chris has managed to find and create a number of opportunities for himself. Since Chris’s hosting days, he’s released three albums and is now BKA (better known as) DJ $crilla. Color of Love is his third album and first attempt at collaborating with the talented and soulful Lauren Lanzaretta. Social networking had a great impact on CoL coming to fruition; Chris and Lauren met through Facebook. Luckily, their sensibilities and talents made CoL possible.

In an effort to give back to the community, Chris and Lauren have made Color of Love free to download in partnership with Berea Children’s and Family Services. Donations to BCFS aren’t required, but they are always welcome. I’ve downloaded my copy and these are two talented Clevelanders! =)


I wish Chris and I could have done a video interview like the old days, but nonetheless I got to ask him a few questions:

We’re a long way from our Brown’s Blitz days, did you know back then that you wanted to make music?


Yes and no. I had been experimenting with music for a few years, but I had no idea of the real passion that was inside of me. At first, I wanted to be a DJ. I had my turntables, my mixer, and made weekly trips to the record store — I thought that was what I was supposed to do, but it wasn’t. It wasn’t until I randomly entered a cipher, that I began to make the transition from DJ’ing to performing. Then I realized that music was my passion.

You’ve been performing all over the country, how have you found these opportunities?


It’s been a real blessing. It’s funny because most people think that I’m randomly pitching schools, or that I have a booking agency, but that’s not the case. I’d say 99% of my shows have been through word of mouth, a simple referral from one person to another.

What’s been the most difficult part of your journey?


I think it’s been a combination of having patience and the reality of the music industry. I’m a workaholic and, at times, it’s hard to have patience waiting for the next opportunity to come. When I first got started in music, I had a perception of what I thought the music industry was like. Once I was exposed to it, it was much different. This journey has been difficult, but it has been wonderful. It’s wonderful because I’m learning everyday, which in return helps me grow as an artist and person.

When I think of Cleveland, Bone Thugs N Harmony and Kid Cudi immediately come to mind. Have you found the music community in Cleveland to be lively and supportive?


I think overall, the music community is very supportive. However, I find that the Hip-Hop/Rap community still has a ways to go. There are some really talented local hip-hoppers in Cleveland. I think we as a whole just need more people to support us, and take a chance on us. For example, I’ve submitted content to festivals/performances in the Cleveland area and they have told me straight up, “We don’t do rap here” – and that’s hard to swallow. Sometimes people hear “rap” and they automatically put you in a box. I see it as an opportunity, an opportunity to change the perception.

I met Lauren Lanzaretta through Facebook– how crazy is that? Lauren sent me a friend request, and that pretty much opened up the dialogue between us. This collaboration was not only something new to me, but Lauren as well. Anytime you try something new there is going to risk involved, but I was eager to accept that challenge. It all started to make sense while we were recording the song “Color of Love.” After that session, I approached Lauren with the idea of doing a collaborative project.

Every artist’s creative process is different, what’s been the most important and effective part of your process?


The most important part of my process is my environment. I’m a firm believer that if the environment is positive, you’ll get positive results. I’m very structured in my whole process, whether I’m recording vocals, or doing post-production. Once Lauren joined, there was a slight shift in the process, but she brought a positive energy, which I think shows in our music. 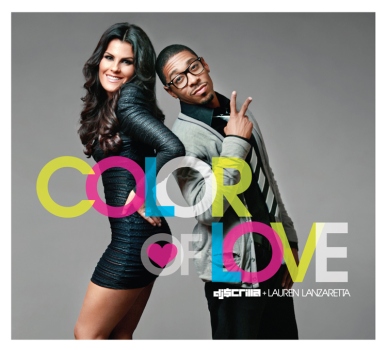 What’s the theme of your new album?
The new album, Color of Love, is an expression about the many different colors of love. Love is so universal, it doesn’t have to mean your love for someone, it can also be your love for some thing, such as music. When a prism breaks up white light, you get 7 colors (ROYGBIV)…Our CD has 7 songs, see what I’m getting at?

You’ve expressed an interest in venturing into other areas of entertainment, what are your plans outside of music?

I’ve always been a creative soul, and I would love to express that through television and film. I would love to eventually work as a Program Director for a cable network. It seems like a very challenging, but cool job to have.

As always, it’s wonderful to witness those who’ve chosen to make rather than wait for opportunities. If you are what you continually do, then there is no doubt that Chris and Lauren are inspiring. Now, if anyone has anything negative to say about Cleveland, keep it to yourself!